Nature Biking
Bike through the heart of the Adirondack Park

About the Adirondack Rail Trail

The Adirondack Rail Trail* is a spectacular 34-mile trail through the heart of the Adirondacks, connecting Lake Placid, Ray Brook, Saranac Lake, Lake Clear, and Tupper Lake. Construction was approved for the rail trail by the Departments of Environmental Conservation and Transportation and certified as complying with the State Land Use Master Plan by the Adirondack Park Agency.  The removal of rail and ties began in October 2020. Construction on phase 1 of the trail (the 9 miles from Lake Placid to Saranac Lake) began in October 2022 and will be completed by September 2023.  Phases 2 and 3 of the trail will connect with Tupper Lake by 2025. The 56 miles connecting Tupper Lake to Piercefield, Sabattis, Lake Lila, Beaver River, Big Moose, and Old Forge will continue to host seasonal tourist rail service but this section of the corridor will continue to be a part of the C7 snowmobile corridor linking Old Forge to the north.

The Adirondack Rail Trail will provide a major new tourist destination in the Adirondack Park and rank as one the finest multi-use, year-round recreational trails in the United States.  The trail will be surfaced mostly with fine-packed crushed stone and pavement in select locations around Saranac Lake. Construction of the trail will garner maximum economic benefit for the towns and villages along the existing rail corridor. Tourists, seasonal homeowners, and permanent residents will all benefit from the Adirondack Rail Trail. This safe, scenic, level recreational path will serve persons of all ages and physical abilities. It will cater to cyclists, nature lovers and history buffs, runners, hikers, bird watchers, and snowmobilers.

The Adirondack Rail Trail will serve as a year-round recreational destination for people of all ages and capabilities. In so doing, it will add to the attraction of the Adirondack Park as a desirable place to vacation, own a second home, reside, work, retire, invest, and operate a business.  The economic benefits of the Adirondack Rail Trail on the Lake Placid-Tupper Lake corridor will be substantial. During most of the year, the trail will be used by bicyclists, walkers, joggers, hikers, and others, a large proportion of whom will reside outside of the region and be drawn to this region by the Adirondack Rail Trail. Their local spending will provide a major boost to the region's economy.  As noted above, RTC based their estimates on equivalent trails' actual usage, forming a composite that gave them a range of expected visitors and spending. They estimate that the 34 miles of trail connecting Lake Placid and Tupper Lake could attract between 56,000 and 800,000 visitors annually, with a midpoint of 224,260 visitors. Out-of-area visitors will spend between $63.86 and $99.30 per day, with an average of $86.02. At the midpoint spending level, visitors will add $19.8 million in annual revenues to the local economies. Local trail users will add $1.8 million in trail-related spending.

In 1986, there were fewer than 200 known rail trails. Today, there are more than 2,000 pathways on former rail lines that form the backbone of a growing trail system that links communities, regions, states, and, ultimately, the entire country. More than a thousand additional trails are in the works, with new projects beginning each month. The Rails-to-Trails Conservancy (RTC) serves as the national voice for this popular movement. Their study of the Lake Placid to Tupper Lake corridor and its potential is linked here. RTC has concluded that a recreational trail in the Adirondacks will draw tourists and economic development to the region. RTC notes that we have the opportunity to offer a unique combination of fresh air, forests, wetlands, lakes, ponds, streams, mountains, wildlife, villages, museums, and all the services recreational users require, including a variety of lodgings and restaurants, all accessible on a year-round basis.

The RTC analysis was largely based on experience with trails located a substantial distance from large urban centers: the Pine Creek Rail Trail is located northeast of Williamsport, PA; the Ghost Town Trail starts 70 miles east of Pittsburgh, PA; the Virginia Creeper Trail is located in a remote region in southwestern Virginia. The trails from the RTC analysis with connections to major urban centers are the Great Allegheny Passage, a 145-mile trail that starts outside of Pittsburgh, PA, the 21-mile Heritage Rail Trail County Park, which starts in York, PA and connects to the Torrey C. Brown Trail in Maryland, which extends twenty miles to a Baltimore suburb. 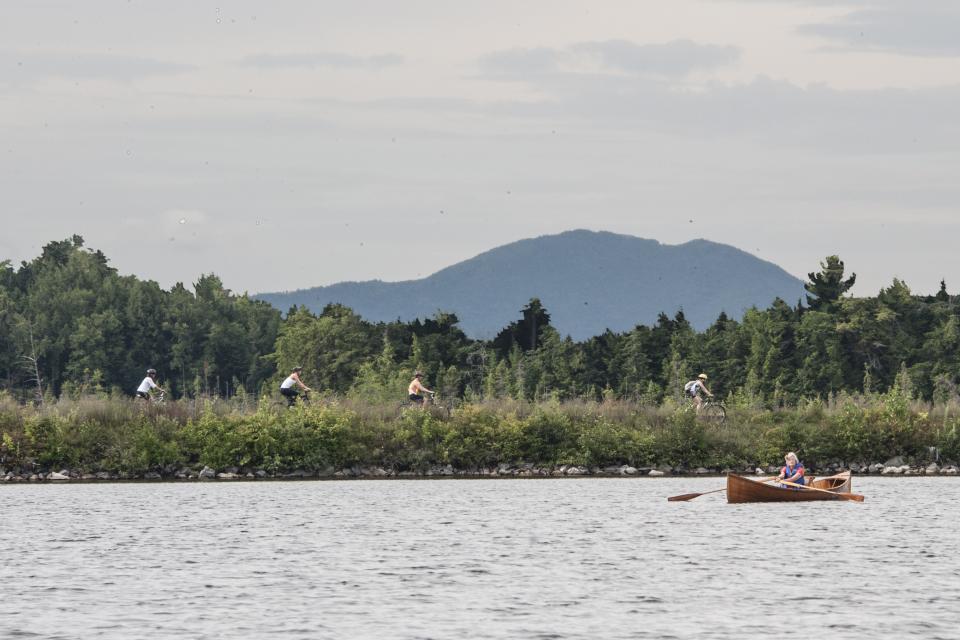 Biking the Adirondack Rail Trail
The trail breaks into two distinct segments: 34 miles from Lake Placid to Tupper Lake, passing through the Villages of Ray Brook, Saranac Lake and Lake CLear, then 56 more miles through Adirondack Wilderness to Old Forge  The first 34 miles that will be suitable for road bikes passes many access and egress points as well as many amenities.
Click Here For More